TLDR; Jurdle is availble to download here, you’ll need a 48K expanded Jupter Ace or Minstrel 4th to run it.

The Jupiter Ace is a curio. Released in the 1982, looking like a hybrid between a ZX81 and a ZX Spectrum (the staff were ex-Sinclair), it stood out from the rest of a very crowded home computer market by choosing to run Forth rather than the ubiquitous BASIC. 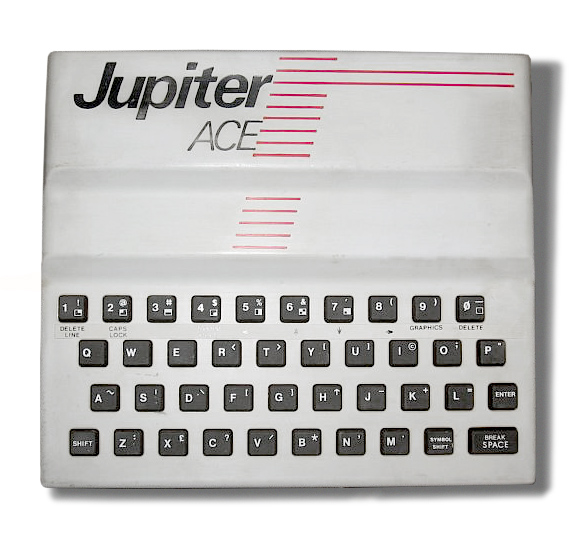 Forth looks familiar if you’ve used Reverse Polish Notation. Pile up values, and then run an operator that takes values from your stack, does something to them, and then puts the result back on on the stack.

Functions in Forth are known as Words: take values off the stack, do something with them, put then back on again.

Forth is FAST (see the binary search section later) compared to it’s BASIC contemporaries, but BASIC scores points in being easy to pick up, and giving you ready access to variables, string manipulation and other conveniences. Working with Forth requires one eye constantly on the stack, and the Jupiter Ace especially was never designed to be friendly. Strings and user input aren’t handled in the manual until Chapter 16, by which point you’ve already covered floating point arithmetic and trigonometry. This machine has a different set of priorities.

However, it is fun. Coding for it involves solving challenges. You want to search a list of 5,000 items - no problem. You want to handle a bunch of keystrokes and put those characters in the right place? You’re going to sweat a bit. And that was one of the key problems for this machine. It sold around 5,000 over it’s lifetime, a speck compared to the 5 million over the lifetime of the Spectrum.

That unfortunately means that getting hold of one today is difficult, expensive, and if you do manage to put your hands on one, it’s often not in good condition. That leaves a couple of options. The EightyOne emulator emulates a range of early Sinclair machines, and includes the Jupiter Ace, memory expansion and peripherals. It’s an excellent development environment. To play with real hardware, Dave Curran designed the Minstrel 4th, a clone of the Jupiter Ace with 49K of built in RAM. You can load files directly from tape or audio file, or use a Jester Ace to load .tap files directly.

The Minstrel 4th is an excellent kit to build, I ran a build stream over Christmas assembling it. The output works nicely with my capture card, and the Jester Ace makes loading files on and off for testing and play a doddle. 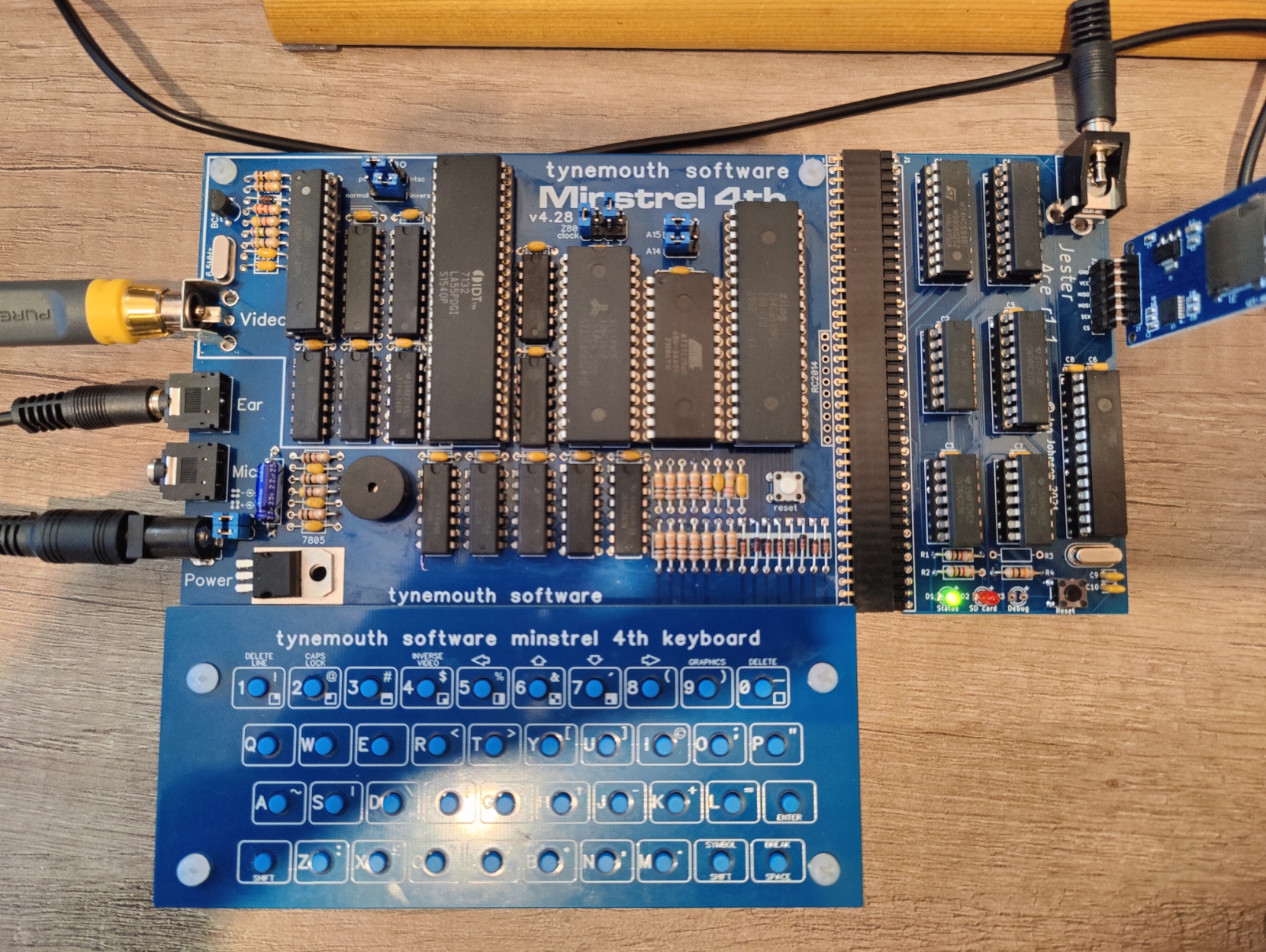 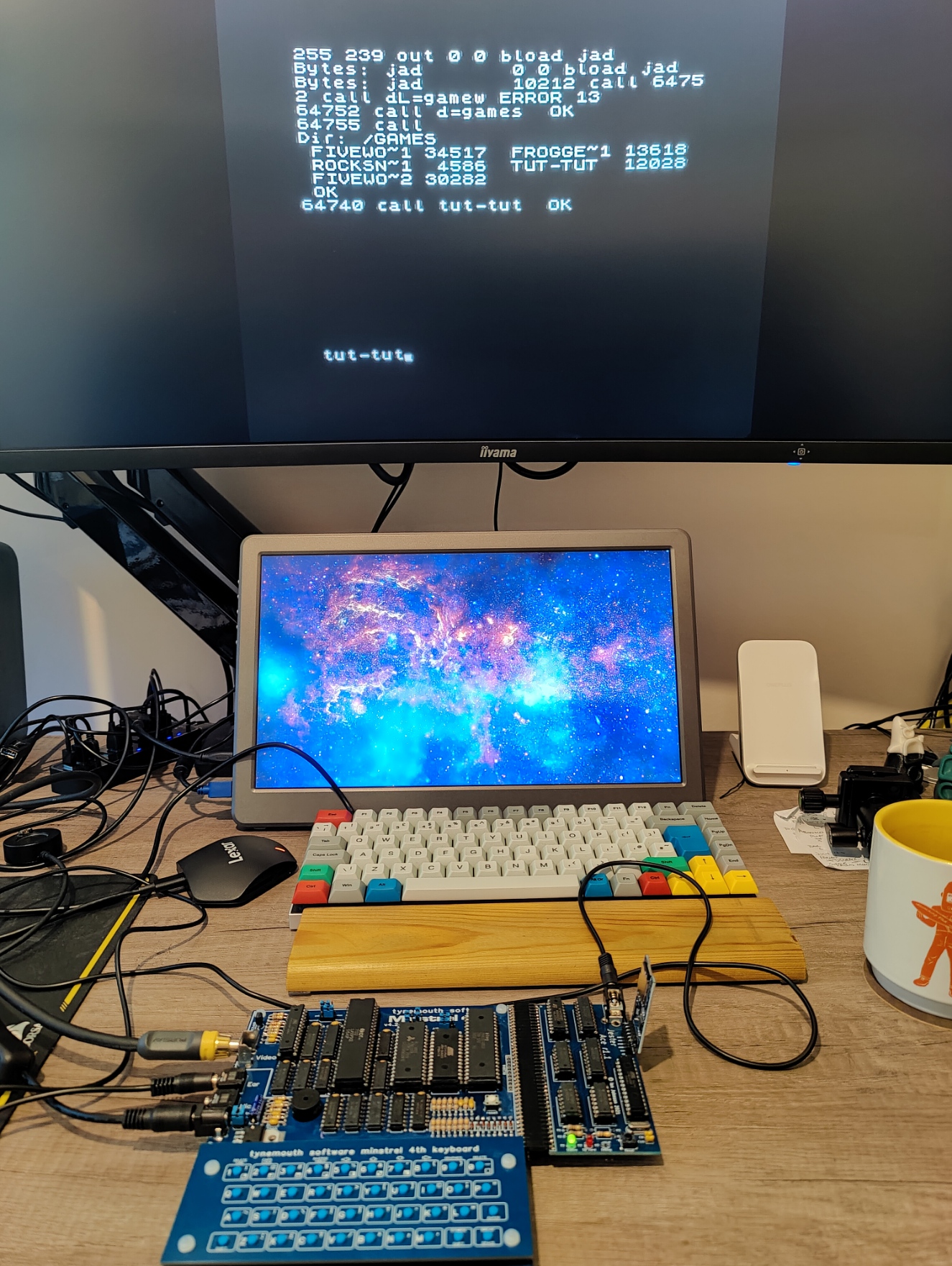 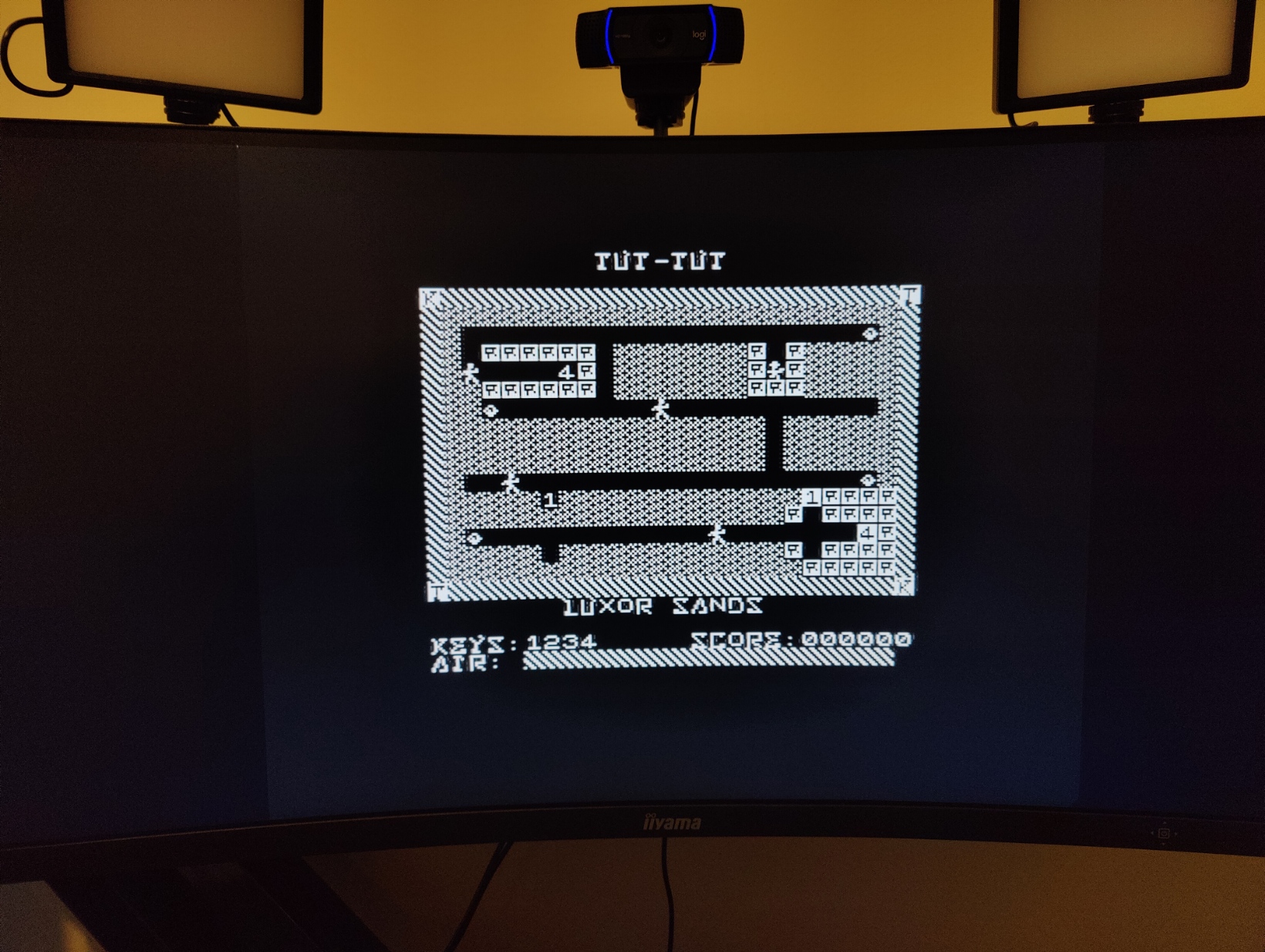 So now we’ve got some interesting hardware to play with, time to write something.

Here it is - here’s Jurdle. It’s Wordle for the Jupiter Ace, geddit? 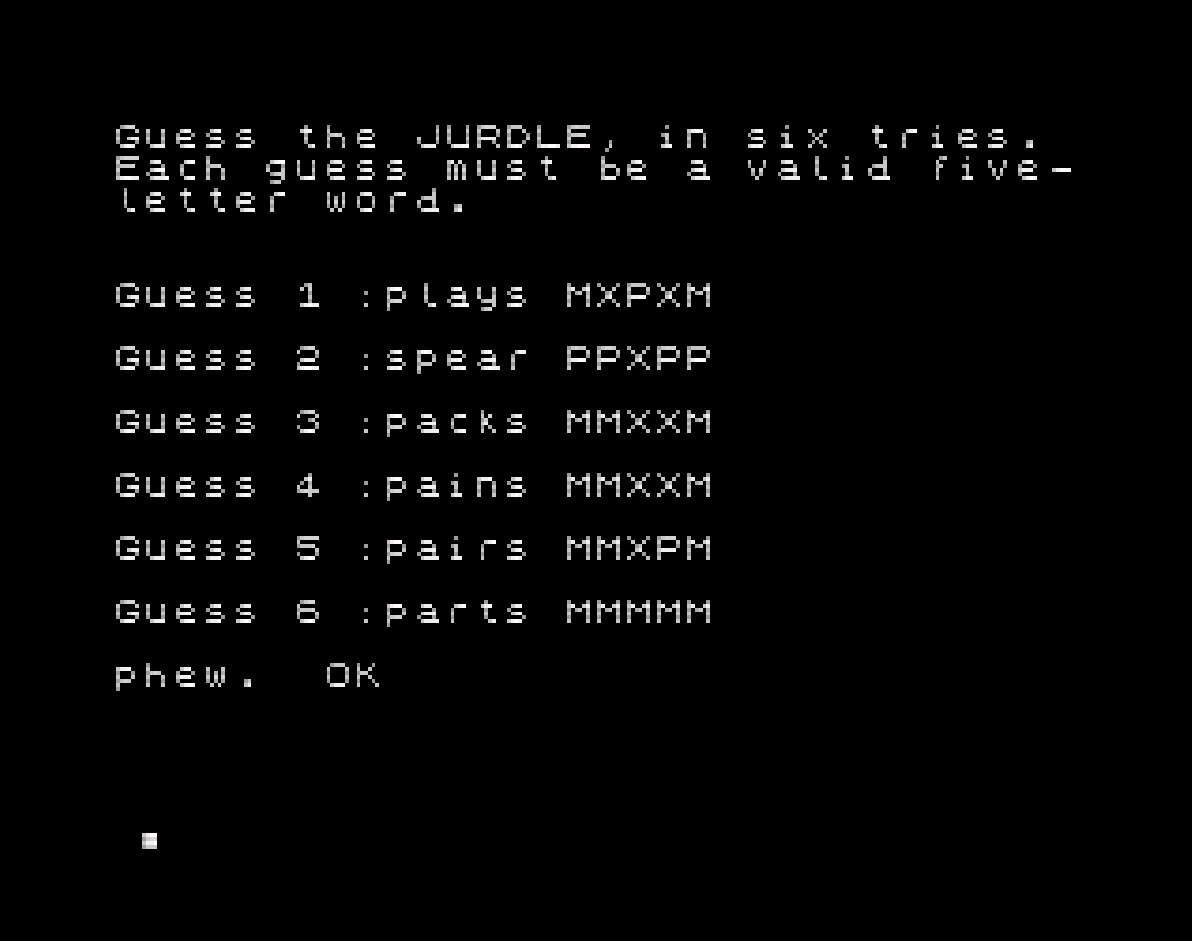 It’s designed to run on a (48K expanded Jupiter Ace)[http://www.jupiter-ace.co.uk/hardware_rampacks.html#jupitercantab48K] or a Minstrel 4th. If you’re using the EightyOne emulator, set it to 51K mode.

We need a wordlist to start with. We’re going with The Stanford GraphBase 5 letter word list that Donald Knuth uses in the Art of Programming It’s public domain, and ~5,000 words. It’s also unsanitised, and contains some very esoteric words, so you’ll find interesting choices in there.

We then need a way to get it in to the Ace. And I a very glad for this article talking about Tut Tut’s development for the Ace.
Level design was done with z80 assembler messages, built using z80asm, loaded directly in to the EightyOne emulator, which becomes the primary development environment. We order the word list, join and then split for every 50 chars, wrap in defm, assemble, and it works like a charm.
After loading the compiled binary, we ask the Ace for the first five letters at the start of the wordlist memory location and we get:

Picking a random word needs a random seed. The Jupiter Ace “Forth Programming” manual by Steven Vickers is very accessible, and also very searchable. I would highly recommend working the book before diving in to a project, and keeping it open for reference. The PDF version hosted on the Jupiter Ace archive is very searchable.

The next big job is searching the word list. Wordle, sorry Jurdle, won’t test an entry until it knows that the word is a valid word. We can try to brute force search the list (I did), if the word is near the end of the list, it’ll take around three minutes. A binary search solves our problem and reduces our search time down to a sub one second range and was surprisingly easy to implement.

The Jupiter Ace is a character based system. I’ve chosen here to display scoring using letters rather than anything fancier, such as user defined graphics. I’ll save that for another project. Scoring is straightforward, we know our entry is over a fixed length, so first check for a direct match, and if we don’t find a direct match, iteratively check for a partial match.

Beyond this is the user input, game loop and chroming for assessing how the player did. Feel free to browse the source code, leave comments, or fork it and improve. It would be nice is some people played it! 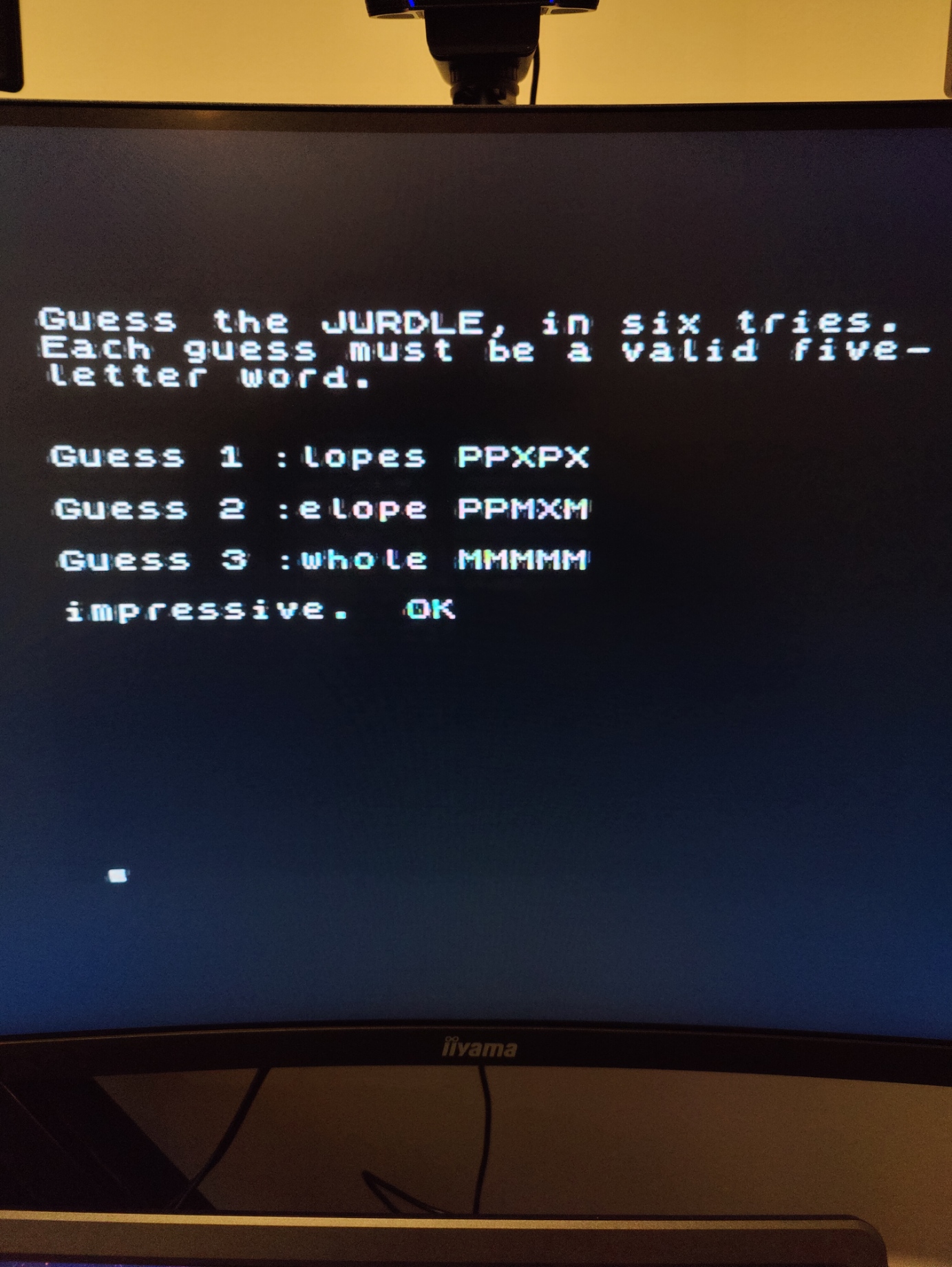