I have coveted (verily coveted), a Psion since my school days.    A few friends had them, I had a Palm IIIe.    And whilst I got a lot of mileage out of my Palm over the years (it got me through university), the potential productivity of the Psion 5 keyboard always wooed me.    I may be 22 years late to the party, but I’ve finally managed to save enough of my weekly pocket money to get one, and … I’m still impressed.

A quick overview - The 5MX was released in 1999, by Psion, the second in the series 5 line and the successor the the Series 3. For context, in 1999 Windows was still wallowing in Windows 98, or NT 4.0 if you were lucky.    Unlike a lot of pocket computers, the Psion 5 can be used independently of a host computer.    Content can be synchronised to a PC using PsiWin, but this doesn’t work with current editions of Windows, so I’ve been copying files and applications to and from a FAT16 formatted compact flash. The screen is a 16 colour greyscale resistive touchscreen LCD with a backlight. I’m currently sat outside, in daylight, typing (this) quite happily.
I struggle to do this on any of my current laptops. The typing experience is … good.  I miss the occasional key, and the keyboard is a little stiff in place. It works loose the more I use it. I suspect that may be age - I’m going to carefully take a look at that when I get the chance.

The built in applications make me weep with joy.    The two key office apps - Word and Sheet are *painfully* well thought out. Most of the experience is keyboard centric - shortcuts are everywhere and logical.    On the whole, if you’re used to modern (or even 1990s) office applications, you’ll be right at home.    Probably more so than you are on a smartphone.    Word supports borders, styles, image embedding, bulleted/numbered lists and a word count.    It uses it’s own binary format for files or raw text. If you want more useful conversions, there are options I’ll talk about later. 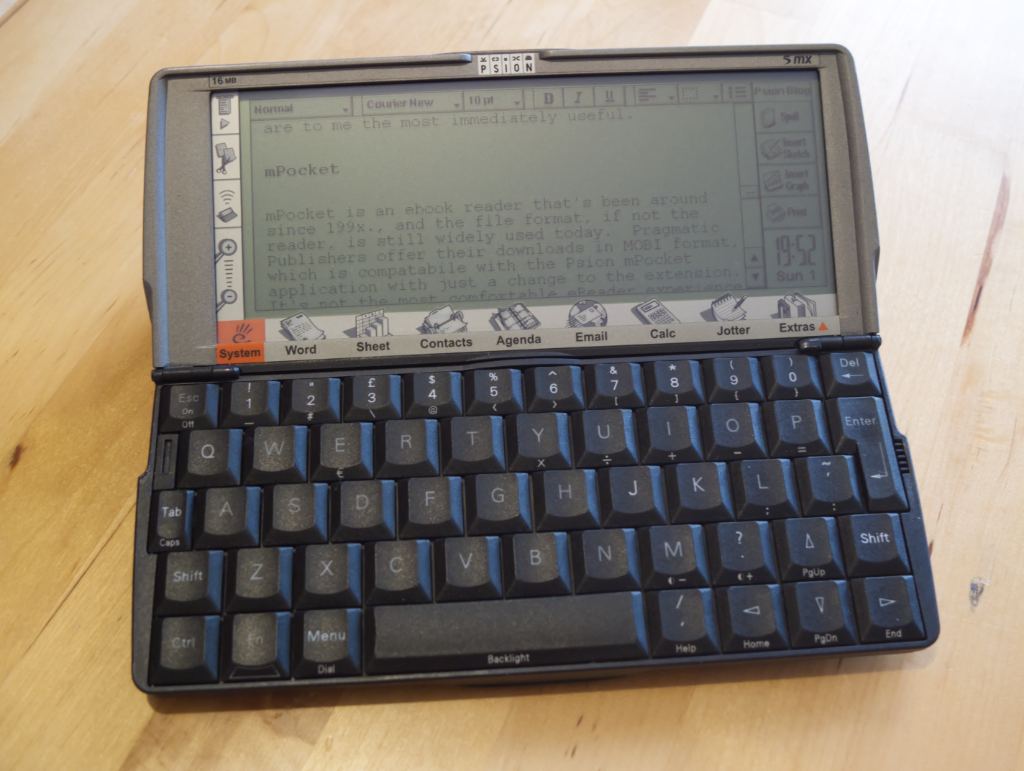 The touch screen membrane is resistive. Resistive screens can be mixed experiences. I have memories of stabbing away on my Palm IIIe with success most of the time, and occasional failures.    This one has so-far been a joy. The built in sketch app is excellent, giving you circles, squares, lines, individual pixels, an eraser, copy region, text and a clip art gallery.    It’s a great example of how well thought through each of apps are - the flexibility of the tool makes it excellent for doodling, charting, or map making, and elevates what could be a very basic sketch app above a toy.    I’ve been doodling a Babel Fish and building a map alongside a Zork play-through. 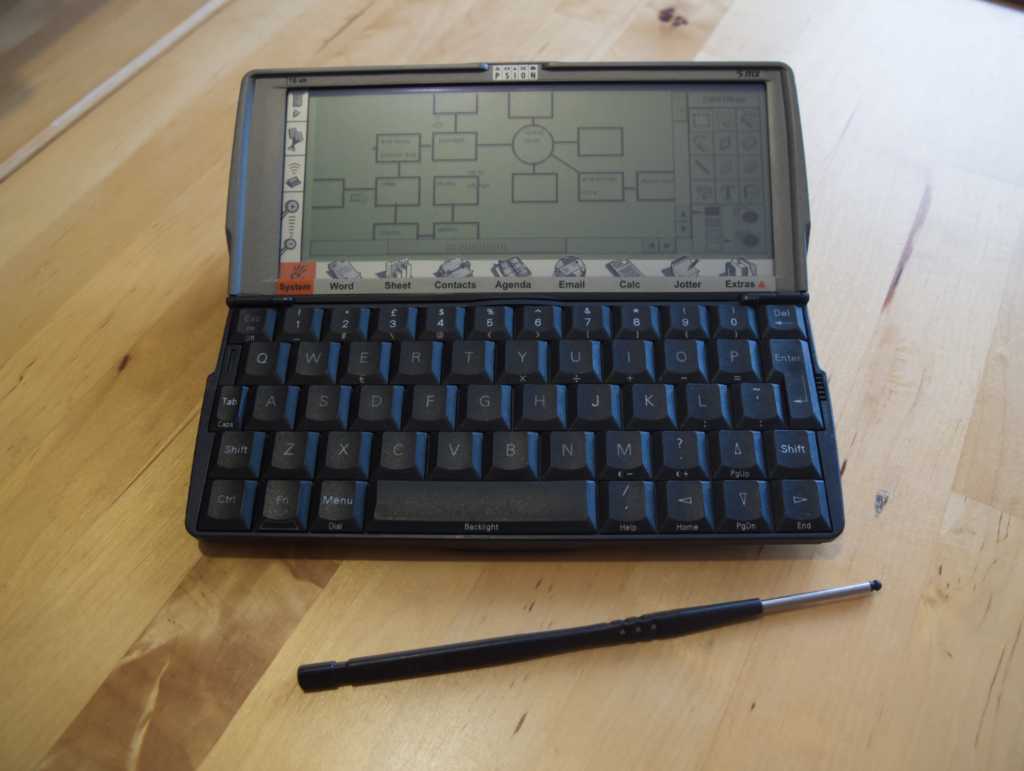 Whilst the touchscreen is excellent, the display is not brilliant, but typical of it’s time.    I’m currently typing outdoors, in direct sunlight - something which is near impossible to do on my laptop.    In these conditions, it’s rather good.    16 colour greyscale, sharp, with contrast adjustment.    Using it indoors requires "good light" and I do not use the quote marks lightly.    There is a backlight, but it is ineffective in all but complete darkness. I tried using it late last night from bed - the display itself was perfectly usable, but the noise was loud enough that my wife commented on it.

Agenda is often referred to as the "killer app" on this platform.    Back in 1999, I would have agreed - it’s possibly the most well thought out calendering system I’ve used and, without intending to sound like a skipping record, it’s usability is superb and honestly leaps above modern contemporaries such as Google Calender.    It’s deep in skeuomorphism - calenders feel like calendars, and todo lists are clearly todo lists, but the entire interface is so well linked with keyboard shortcuts and useful features that you find yourself wondering why we can’t do this in 2021.    But it is 2021, and I think that disconnected calendars possibly have a limited usefulness, where you’re dependant on the events of others and your inbox as well as your own for day to day management.    So whilst it really is a most beautiful application (and I’m using it to manage the house move), for calendar management I’m still stuck with my phone.

Amendment: I may have changed my opinion. We moved house last week and I’ve been using Agenda and it’s Todo system heavily to organise not just the house move but the post-house setup. It’s disconnected nature has turned into a blessing, giving a breathing space to a clearly defined set of tasks. I’ll continue to use it this way.

The Psion Series 5 runs EPOC32, a closed operating system that would eventually evolve to become Symbian and the base for many mobile phones and future portable devices.    Back in 1999, this was a strong ecosystem with plenty of third party commercial software, freeware and shareware.    Unlike many legacy/retro platforms, there’s a surpring lack of a modern development community for the device, which seems a shame, considering there’s an excellent built-in language.    But there is plenty of existing software to explore.    Towards the end of the platform’s life, a number of commercial developers, released serial codes for their software to allow you to use it unrestricted.

Some software I’ve been experimenting with:

XTM Emulator - Emulates a XT PC with DOS.    It’s apparently possible to get Windows 3.0 running. In the short time I played with it, I managed to get WordPerfect 4.2 running, but failed to    successfully get King’s Quest 2 to run.    Audio would start, but graphics would fail. Caused some problems with my CF card, had to eventually format the card.

Neuon nConvert via Neuon - Psion’s own built in formats for it’s office applications are proprietary binary - you can’t just easily take the files produced and open them in your favourite office suite.    PC side file converters exist, but nConvert allows you to perform a range of file format converions directly on the Psion.    Psion Word to RTF, HTML, and Sketch to GIF (and the reverse) are to me the most immediately useful.

MobiPocket via TobiDog - MobiPocket were around from 2000-2016, and the file format, if not the reader, is still widely used today.    Pragmatic Publishers offer their downloads in MOBI format, which is compatible with the Psion mPocket application with just a change to the file extension from .mobi to .prc.   It’s not the most comfortable eReader experience - I now have dedicated ePaper readers that I use for day to day reading, but I do like having a copy of reference books for referencing.    And if required, it’ll do as a reader in a pinch.

Neuon NSwitcher via Neuon - I am, in general. a bit of a keyboard junkie.    I was primarily a Vim user, then moved over to Visual Studio Code with Vim plugins.    I really like the Psion because it’s got a very usable keyboard stuck on to the bottom of it.    I was a little disappointed to find that application switching involved keystrokes using the silkscreen "System" key. nSwitcher provides two functions - a taskbar of running applications (which can be hidden) and a better keyboard shortcut for application switching - Ctrl + Space.    It moves an interrupted keyboard workflow to much more keyboard-centric workflow.    Bliss.

This is, by no stretch of the imagination, an ideal gaming platform.    If you want to mobile game on a black and white screen - carry a GameBoy (I keep a Pocket for just that reason).    But there are some types of games that this platform does quite well.    SimCity via TobiDog was released on the Psion, and, well, it’s SimCity.    Proper SimCity.    The original.    And with a touch screen and keyboard shortcuts, super playable. 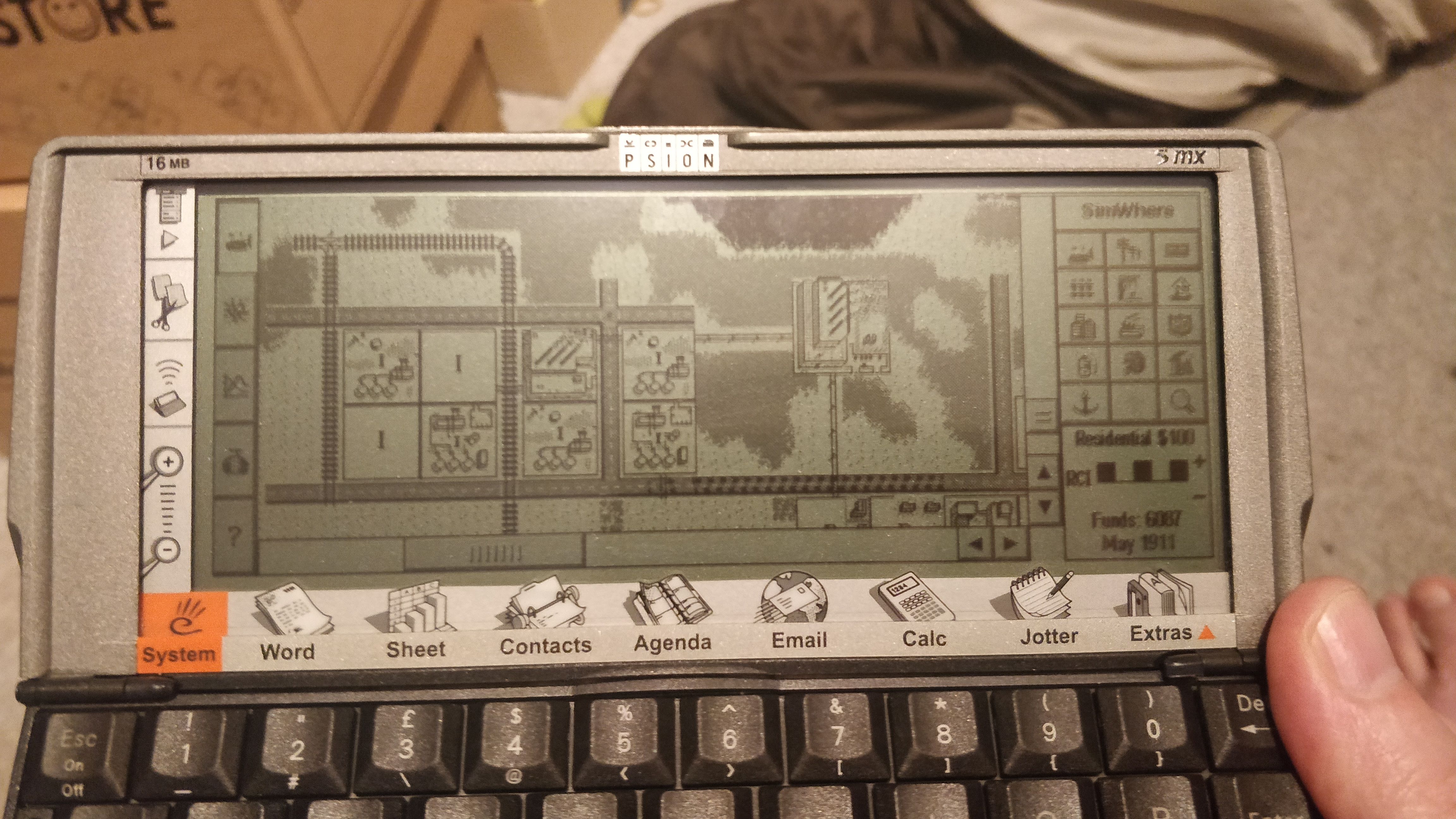 Neuon Matience is a Mah-jongg patience game that’s well put together and a good time waster. I’ve spent an unexpected few hours on this so far.

My absolute love has to be a port of Frotz.    This allows me to play Infocom-style Z-engine text adventure games.  Combined with Sketch for map making and Word for note taking and you’ve got a very flexible combination for in-depth portable text adventure gaming. I’ve been giving Zork 1 a play-through.
It’s a great way to play. 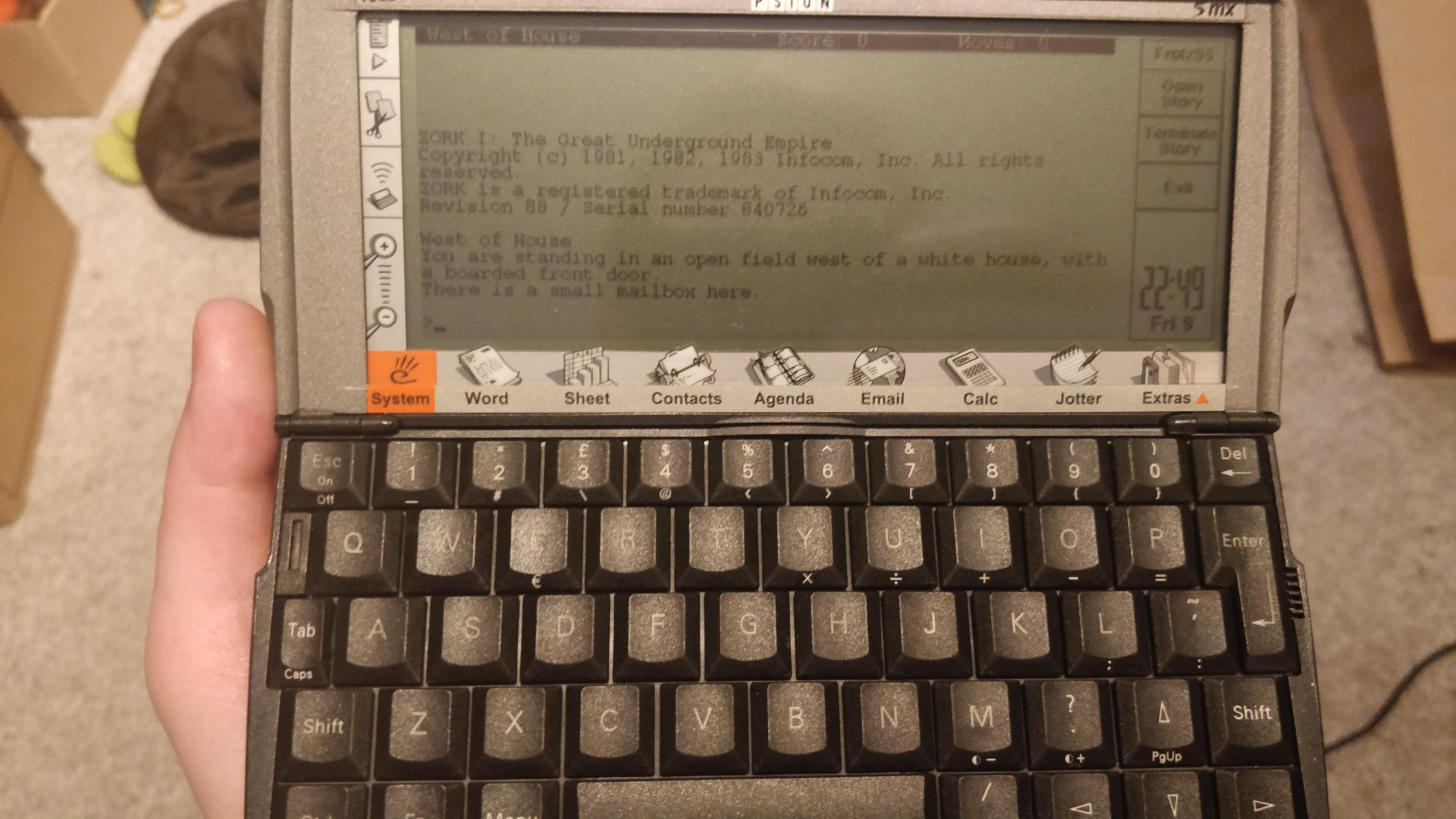 Without PsiLink, I’ve been using a compact flash card to move applications and files on and off the Psion.   The Psion supports FAT16, but can be a little fussy about table setup and formatting. It’s also a little fussy about cards. I tried two - a Lexar 4GB card refused to work at all, but a 1GB Transcend card worked out of the box, then failed, then worked again after formatting under Linux.

For me, the winning approach has been:

I’ll be honest, there’s not a lot I want to change on this. Usually I end up with a machine and end up making a bunch of mods. There are none to make here. At some point the ribbon cable will need replacing (they all do), and I’ve got my eyes open for a replacement cable. But it works well. And I look at the modern offerings, even from Planet computers and they’re not what I’m looking for. Maybe a Psion 5 form factor device with an e-ink screen and switchable wifi. Let me organise on this thing, write a bit, stay slightly disconnected. A terminal/ssh application would be nice to allow for some remote server shenanigans. That’s it. Let’s not spoil perfection. I suspect though, that if I want that device, I’m going to have to built it.