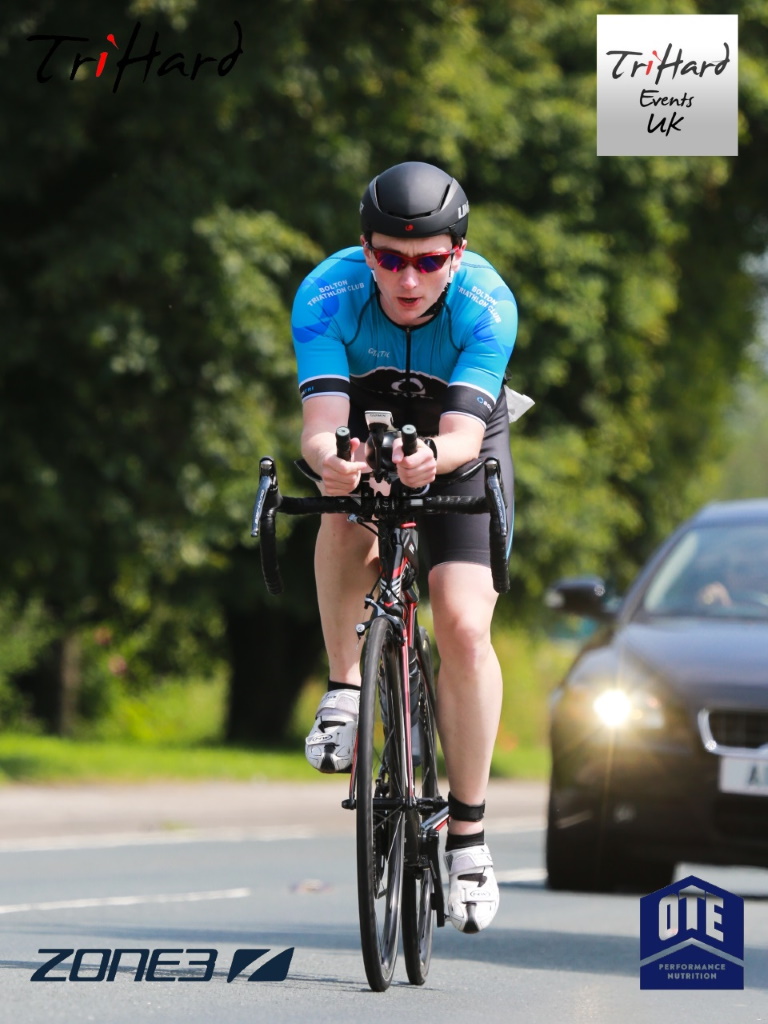 Ripon Standard Triathlon is held in the middle of Ripon Triathlon Weekend, a festival of racing with open water swims, standard and sprint distance tris, and finishing up with Tristars (juniors) on the Sunday. It’s a relaxed event, where you pull up your car or camper on the Friday, pitch up a tent, and take in a relaxing weekend with a bit of racing. There’s a race village, entertainment and food put on during the evenings and the whole thing is quite … chilled. As a weekend, it was most excellent.

The race, oh, the race was anything but.

We arrived on Friday and pitched up, and after meeting a few neighbours, eventually managed to get to sleep. My plan was an early start, quick outing for Parkrun in the morning as a leg-opener and then the race in the afternoon. On waking at 7, I did a quick mental kit-check and realised I didn’t have my bike shoes. So, rather than a nice, chilled Parkrun, I got a furious 3 hours of driving to and from Bolton to pick up some shoes. Good start.

Because open water racing was on earlier in the day, the standard distance race started at 1pm - it also happened to be the hottest weekend of the year so far. Beneficial, since it gave me time to go and get bike shoes, it also meant the water was sub-bubbling before we got in it. Most people still opted for wetsuits and after a bit of a mangled race briefing (thanks to the NYP guys next to us who gave us a personal briefing - it was much appreciated), the first few waves were in the water while the rest of us baked in neoprene on the shore. Noticing how much we were baking, we were directed in to the water to cool down while we waited - and I don’t think I’ve ever been so grateful to get in the water.

Once in, our timing wave split nicely with a few speedier ones at the front deciding to make a working group and push a bit. This was a surprisingly good feeling, and we pulled through quite a lot of people to the back of the previous wave. We made up enough time that wife managed to miss me leaving the water and entering T1, despite me waving. T1 was pretty seamless, and then we were out on road.

The roads were quiet, flat, and fast. By now, it was somewhere near 2pm, and heat was really ramping up. I kept the pace low, knowing the heat was going to be the key frustration of the day, and not wanting to break too early. I hadn’t had a chance to ride the route previously, so this was a bit of an unknown. There was very little shade, and the sun was super-smiley for the whole 40k. Whilst pleasant, the route was relatively unremarkable. Head down, keep moving.

Coming in to T2 was pretty painless, but by now we’re in to real hell-heat and I’m feeling like the inside of a fried-chicken. Steady pace out of T2, and I test the legs to see what happens if I open them up. I can’t. Nothing. Any attempt to go just doesn’t. This is a bit weird. Most I can manage it an aggressive trot. Fair enough, I’m baked. I’m wondering how I’m going to manage 10K of this when a visage comes upon me. Around 1.5k in, a man offers respite with a hosepipe and I declare my undying love for him. I gladly accept his gift, the shock to the system wakes me up a bit and I press on. The person running next to me tells me there’ll be plenty more. I’m perplexed - this is a new phenomenon to me. But rightly enough, in another 500m, another hosepipe. A kilometre down, it’s a gaggle of children with super-soakers. It feels like a win-win for everyone. There’s a dry patch over the the kilometre around the turnaround point, and having grown accustomed to the ritual shock of the water, I’m desperate for the next one. The return is similar to the out, although it’s gruelling. At the 7km mark, we turn off along a canal path and this feels like our first, brief, taste of shade. Pace is gone from my legs and it’s drop to a walk/run for bit, and I convince myself that another kilometre of this and we’ll pick it right back up. It’s the 9km mark before we really do, and then it’s a hard push to try and get a finish in.

This is the first time I’ve truly collapsed over the line. My vision’s a blur, I’m not dehydrated but something is not right, and my head is pounding away. Many people pour water over me (and others) bringing my temperature back down until I can start to see again. This is a bit crazy, all things given. It takes time for me to recover, and become a little bit human again.