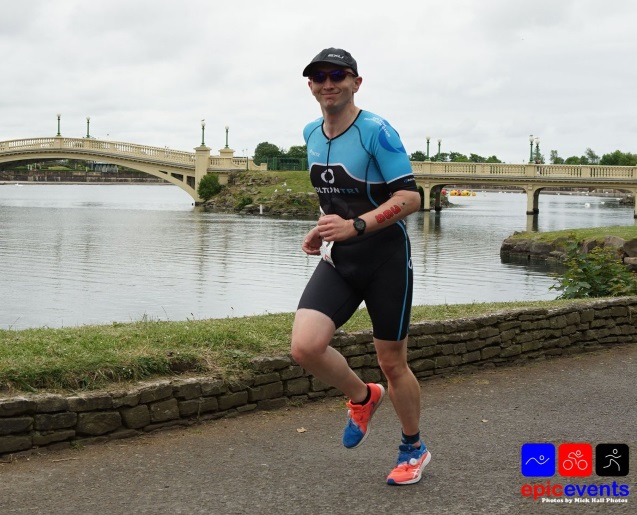 Southport serves as a bit of nexus. It’s early in the season, and yet acts as Triathlon England Standard distance championships, ETU qualifiers, and the BUCS Standard championships. As such, it is a bloody fast race. It’s also it’s been going for quite a while a while, here’s some Grandstand coverage from 1989.

The swim is the biggest challenge of the course. I was warned of the water quality - but not warned … enough. I don’t think any warning would have been enough. The swim course is two laps around an island in a closed lake. It is foul from fowl. I have never swam in water so awful. It took a few minutes of retching before I could get going, and then settle in to a pace. That was a first. 2:20-ish/100m, end up coming out at the back of the group.

Out of the water, on to the bike. T1 was fine. The bike course is straight, mostly flat with a little undulation and a bit of cross wind. Head down, power up. Happy to keep 31kph for most of the course, and play catch-up by around 50 places.

T2 proved fun. I really needed a loo break, and had some issues getting out of my skinsuit. I may have ended up with the longest T2 I’ve ever recorded. Need a little more practice getting in and out of that thing. On to the run, the run course is quite flat - and enjoyable. Run courses can be boring as hell - just running around a field. This one took in lakes, a bit of town, a model village, things to read. Fantastic. 5:15/km for the first eight km, Down to 5:05/km and 4:40/km to finish. Very happy with that.

Happy with bike and run, pacing was bob on. May have had a little more in the tank - but more than happy with where that currently is. Swim pace I was surprisingly OK with given most of it - however, the start shocked me, it took minutes before I could get settled in.