I /was/ hoping that I could write a nice piece about how Tesco pretty much gave me a free tablet, and how pleasant a thing it is.

But so far, it’s taken two and a half days and four trips to the store to buy one. I’ve finally got a unit that appears to work sat on my desk, but I’ve not made it to the home screen yet.

Tesco are currently running a promotion where you can purchase a Hudl2 using Clubcard Boost, doubling the value of clubcard vouchers. Since we have Â£50 in vouchers, that covers the cost of the device. Neat.

So at midnight on Thursday morning after a long shift with some highly resilient-to-change code I wander to Horwich Tesco Extra and attempt to purchase a unit. Since there are non out on the shelves, and no little bits of paper for them, I’m told to come back during the phone desk opening hours. Inconvenient (it’s a 24 hour supermarket), but fair enough.

At quarter to eleven in the morning on Thursday I wander in to the store and head to the electrical desk. I ask to buy a Hudl2, at which point the sales person promptly disappears behind the door labelled “Tesco Direct”. Five minutes later, he returns with a unit and rings it through the till. I point out I want to pay using my Clubcard vouchers, and I’m informed that I have to do that online through Tesco Direct and wait until the following day, despite the clearly available stock (the unit is in front of me), and despite the advertising for Clubcard boost being everywhere where the Hudl is displayed in store, with no clear indication that this can only be done through Direct. 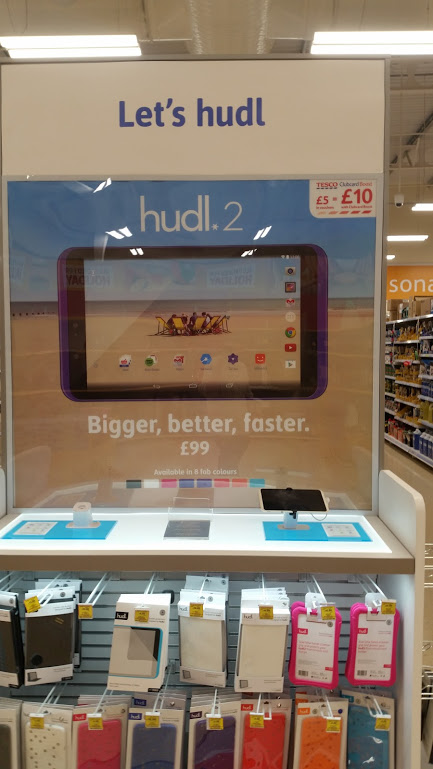 At around half past eleven, while sat in a car in Milnrow waiting for a passenger, I place an order online, through Tesco Direct, for a Hudl2. Collection is at 3pm the following day from the Horwich store.

On Friday I collect the unit at around half past three.

_Memory Jog: I’ve been reminded the following bit happened as well. Picking up the unit turned out to be not so straightforward.</p>

On the way out of the store, I notice a line of “soft touch cases”. The end unit (in white) was the only one with price tag labelled as “priced to clear, Â£10”. So I picked a black one up and took it to the till. When it was rung through it came up as Â£15. I pointed this out and the lady went to check it. Five minutes later she came back and said that since there was no price above the black ones, it was only the white ones at the discounted price. I asked her to keep the case at that point.

As I then passed through the security barrier, the alarms went off. I was asked for the receipt for the Hudl2 in the bag. When I asked for one at the Direct desk I was told that I wouldn’t need a paper receipt, since I had been sent one via e-mail. This caused confusion for the person on the self serve till who kept insisting on a non-existent receipt. I was eventually allowed to leave.[1]</em>

I take the unit home and open the box. There’s no partial charge (unusual for modern devices), so I plug the unit in with the included charger. No charging light appears which seems odd, so I leave it for a little while. Unit fails to turn on. When I plug it in to my 40W Anker desktop charger, the charging light turns on and it appears to start charging. I turn the unit on, and am promptly shown the Android recovery screen. I /really/ shouldn’t be seeing this on a first boot, but I restart the unit, and Android boots.

Not a great first impression.

Phone technical support. On with first line support for a while, he instantly RMAs the device, and puts me through to Tesco Direct to organise a return and replacement. Unfortunately, the cut off for next day has passed, so could I exchange the unit on Monday?

We started this on Wednesday. It’s Friday. Can I wait until Monday to get a functional unit?

This wasn’t an adequate response. I know there’s stock in the store, I appreciate they have separate stock for retail and Direct. I’m not a happy bunny and I make this clear. Direct support phones the store and the electrical manager agrees to do a replacement on store stock. Fair enough. Drive up to store to talk to the manager that talked to the Tesco Direct service person on the phone. He agrees to replace the unit, and that part goes off without a hitch.

I now have the second unit on my desk. It appears to be doing an OTA update.

First impressions of the unit itself are:

That’s it. I have nothing else I can say about the Hudl2 itself yet. Hopefully I’ll have something pleasant to report later.

[1] I was told on my last visit in that I should have shown the sticker on the box, which shows the item was a Direct, rather than store purchase. Neither I nor the person on the self-serve till had any idea that this sticker existed, or that it counted as a proof of purchase.