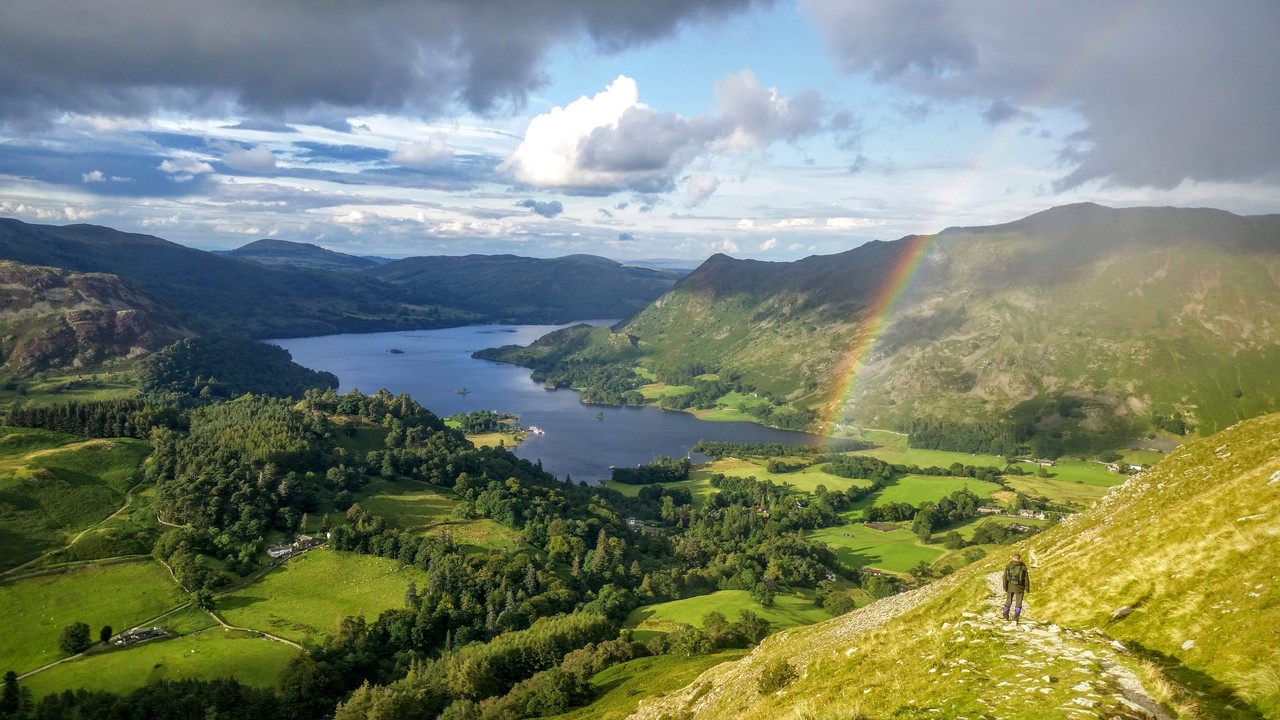 “Let’s do Helvellyn”, he said. “Let’s do Striding Edge”, he said. At no point did he say, “oh, and let’s do a dozen other summits at the same time”.

After our rather fun trip to Snowdon, Nick and I started discussing our next trip whilst returning home. He was pretty quick off the mark with Helvellyn, and I was pretty quick to say yes. If this year is going to be the year of bagging big ones, we might as well bag them proper. So, a nice long hike taking in Helvellyn via Striding Edge and then a set of easy up and downs via Fairfield before heading back.

So, we arrived on Tuesday morning in Patterdale to ominous weather. Exceptionally ominous, deep and foreboding. The skies were clear, and that’s never a good sign. Finding Patterdale mostly full, we moved up to Glenridding and parked in the main car park.

From there we followed Mires Beck, up to Birkhouse Moor and along to Hole-in-The-Wall (which now has a convenient stile to aid hopping over the hole). Going was a little slow, but steady, and terrain was good underfoot. Being either the last day of the school holidays or the first day back, we were expecting the trip to be reasonably quiet, and to an extent it was. We were some of the first on Striding Edge, with a small trail behind us. 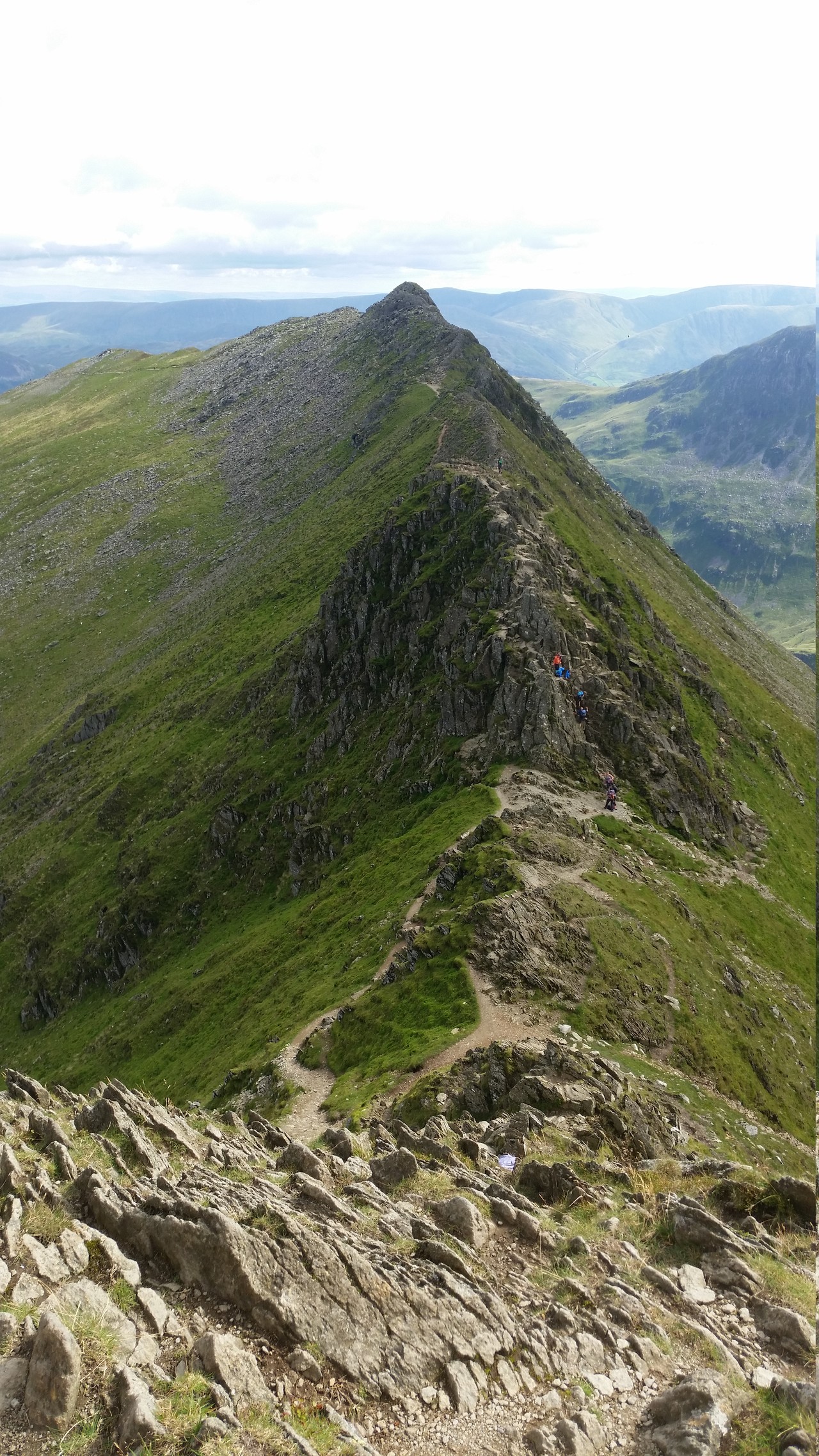 Nick scrambling is a different beast to Nick walking. When presented with a lump of exposed rock, his first instinct is to grow a pair of hooves, bleat to the open air and go bounding off over the very top of every available rock, irrespective of if there’s a path nearby. The people behind us looked towards Nick as some form of prophet or saviour and between us, we helped a few people get through. Looking down to the right gives a great view of Red Tarn – I wouldn’t mind swimming in that one day.

Striding Edge completed, we finished the last bit of ascent to the summit of Helvellyn, to find a group of D of Eers out on their final expedition. One of many it turns out, some slightly more clued than others. They were ahead of their timetable and waiting for another group to meet them at the summit before moving on. We stopped and lunched for a while before wishing them well and moving on towards Dollywaggon Pike. 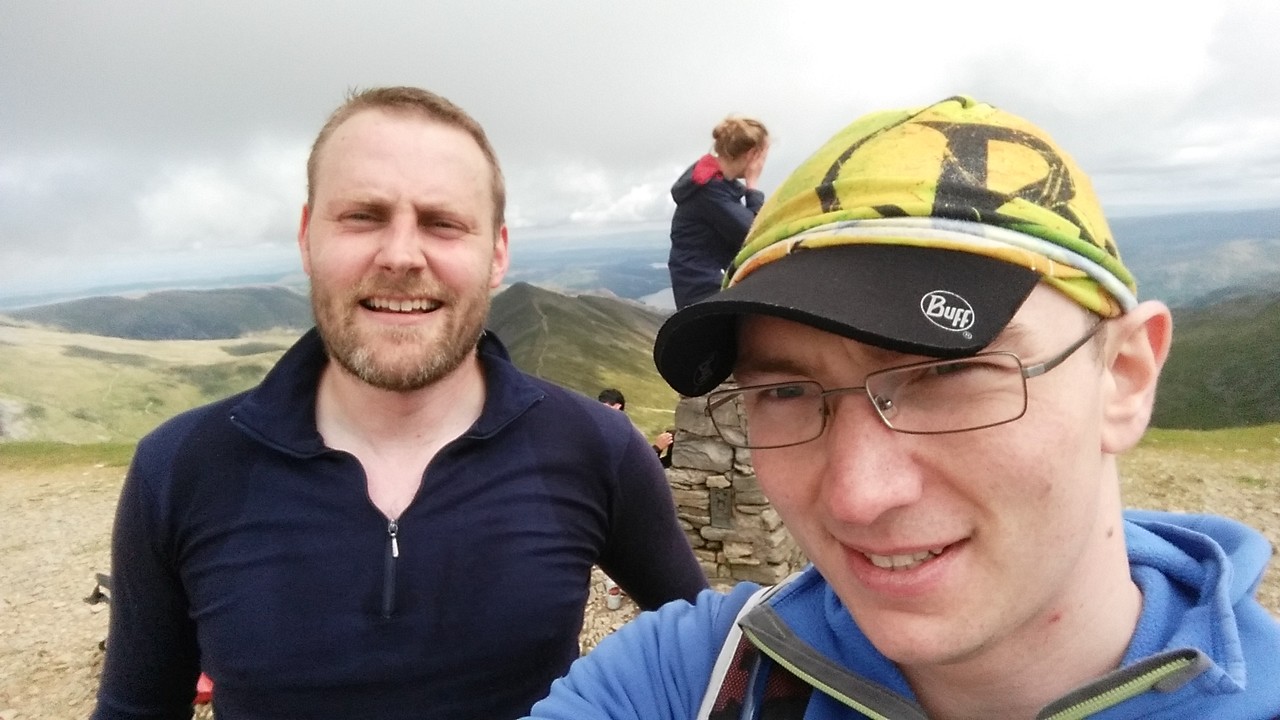 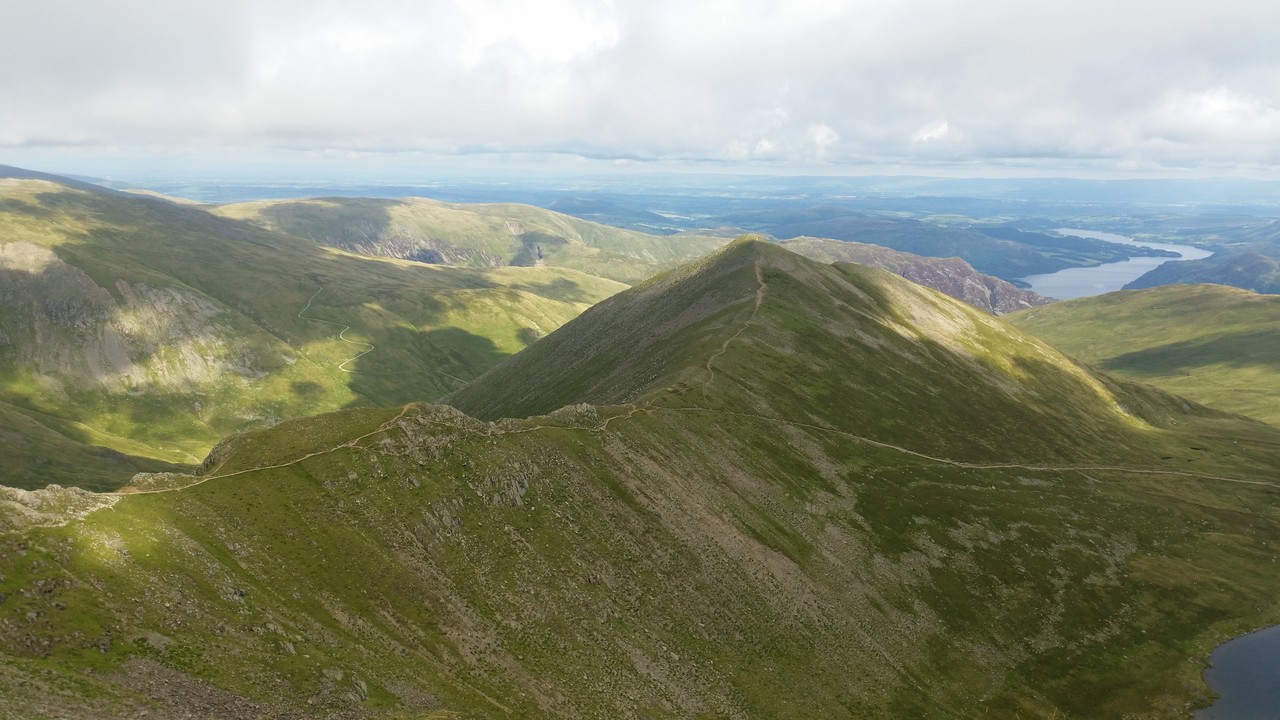 For the first time this year, we summited with a clear sky and a view.

Helvellyn to Dollywaggon was not too bad, little bit of down, little bit of up. We really, should have noticed some warning bells at this point when Nick was clearly struggling with ascent and I was the same on descent over loose surface, but stubborn we both are so pushed on. Dollywaggon provided some pleasant views, and then there was some debate. Nick had originally planned on going direct to Fairfield, but the GPX file we reviewed earlier took us via Seat Sandal. We took a look, decided Seat Sandal seemed fair game and made a start.

From Dollywaggon to the base of Seat Sandal is a 284m drop in approximately 750m. From there, it’s a 162m climb in 500m to the top. Both sides are loose scree. There are very few times, if ever, that I accuse a map of lying, but this is one of them. Those contour lines should be a solid block of orange, with a large WARNING printed over the top. Nick the mountain goat went bounding off down, but for me, the descent was excruciating, requiring constant concentration just to stay on my feet. The moment I let my mind wander for a second, and bam down I went. Three somewhat controlled falls on to my arse on the way down. Half way down I hollered “who’s bright idea was this?”, shortly followed by a response of “YOURS!”.

Seat Sandal is characterised mostly by a long low wall and a few cairns. We saw another group of walkers out, but unlike the D of Eers, these lot were timid day trippers and scarped like local wildlife. The local wildlife however, couldn’t give a damn, and a crow gave us a serious eyeballing from one of the nearby cairns.

Moving on, we descended … again, over some “challenging” terrain to reach Hause Gap. Here we met with a second group of D of Eers, on yet another break. This lot liked their breaks, but claimed to hardly ever get lost. Except for when they started off again, and clearly went in the wrong direction. Oh well, they’ll work it out.

Just to remind us it was still there, the clouds decided to drop some of the water they were holding on to. As a mark of concession, it came in the form of sleet rather than hail. 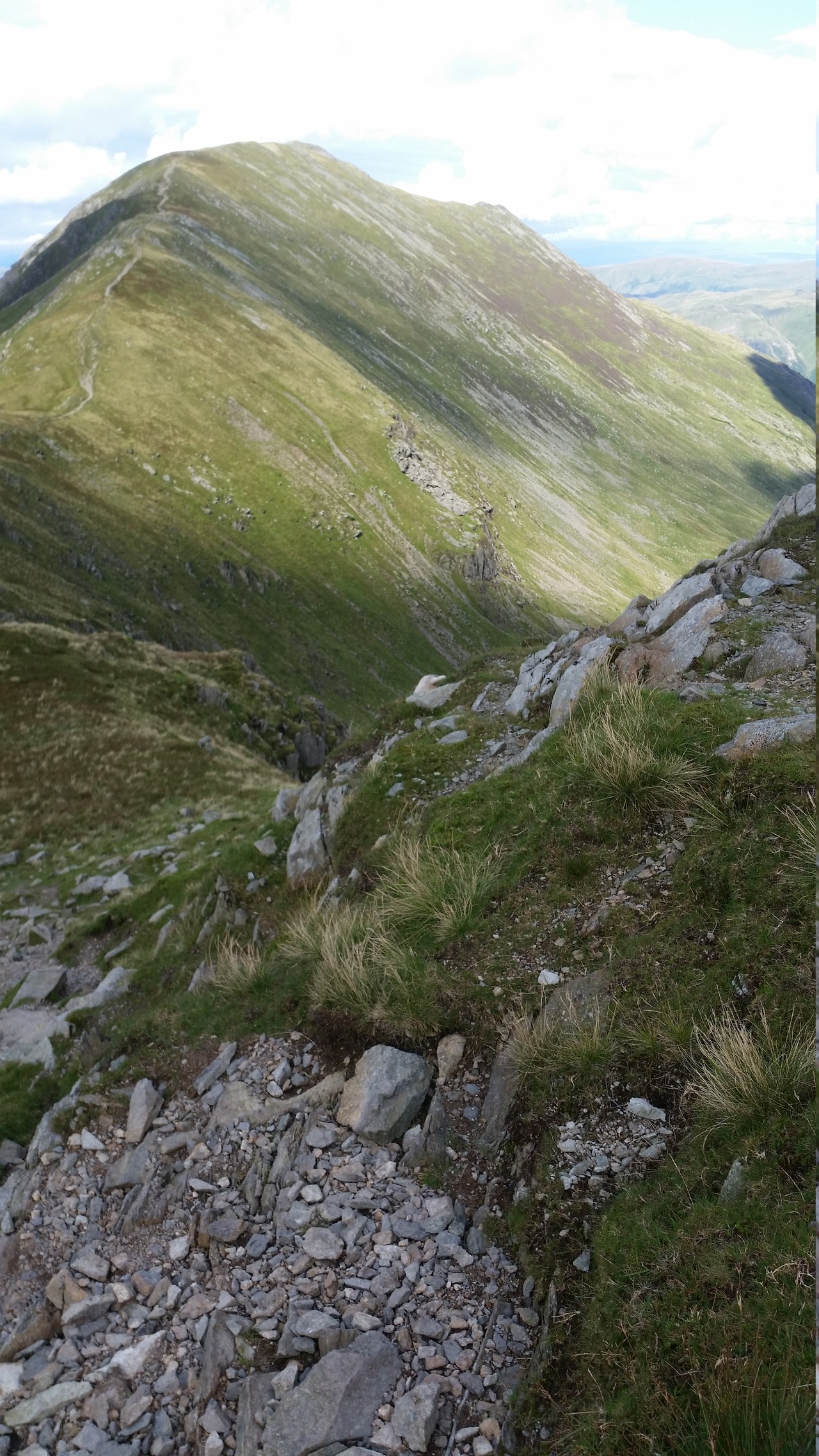 We made the last bit of serious ascent to Fairfield, which represented the start of the return leg of our trip. By the time we made it to St Sunday Crag, the walking was getting easier, and we finally managed a bit of a stride. As some compensation for what had been a hellish bit of walking, the clouds parted and a double rainbow appeared that was so close, you could almost reach out and touch it. Since we were no longer parked in Patterdale, we decided to change route a bit and descend through Thornhow End, cutting through Thornhow, Brownend Plantation and back to Glenridding.

Entering Thornhow End was like being cast back to the Jurrasic Age. We were surrounded by old, dead trees and ferns everywhere. I wouldn’t have been surprised to have turned the corner to find Chris Pratt teaching tricks to a bunch of Raptors. It was a stark contrast to the relative bleakness of the mountains we had been walking on. Upset by the lack of attention it was receiving, the weather contributed a quick, tropical downpour.

All walks should end with a brief wander through a wood. They’re refreshing, warming and a nice soft ending on the feet. This one saw us passing around Lanty’s Tarn, and then back to the car park. Our original plan had us finishing around five, we were two hours late, more than a little sore, and hungry. Before heading back we stopped for dinner at the Glenridding Hotel. The pie was reasonable, the beer is good, the sticky toffee pudding was superb.