Who Needs A Laptop?

We’ve just got back from our Honeymoon, where I shot a few thousand shots, reduced to 400, on a Fuji X10.Â  The process of selecting those photos, a few selective edits, and uploading were all done with no laptop in sight.

So Cat and I were married on the 13th October.Â  With some help from our friends, and some very last minute booking, a few days later we flew out to Orlando for two weeks of unashamed tourism at some of the best theme parks in the world.Â  For a number of years, I’ve been a stalwart B&W film shooter – which has been great for when I’ve been trying with my photography, but not so good for casual holiday photography.Â  In fact, after our last foreign holiday, a few cock-ups meant I lost several rolls of film, so have very little record of that trip.Â  Not wanting to take any of the DSLRs for myself (Cat has two), and after playing with a friend’s Fuji X10, I was suitably impressed with the feels of it’s controls that I picked one up from Calumet.Â  Review on the camera to follow.

I also refused – absolutely refused – to take my laptop with me on honeymoon.Â  My now venerable Motorola Xoom did go with me, as did a Bluetooth keyboard, and a micro to full size USB adapter with the intention of stitching it all together in some kind of workflow.Â  I had no idea how well this was going to work, or not work.Â  At worst case, I could grab more SD cards for the camera and do any work when I got back.

Since I had a seven hour flight to kill, the first job was to connect the camera to the tablet.Â  Modern cameras no longer appear to have a mass storage mode, shunning it for PTP only.Â  The Motorolla Xoom stock firmware includes a PTP mode, which should allow for a direct connection.Â  Unfortunately (in this case), The TeamEOS Rom I run, which enables a significant number of things, does not include a PTP mode, so I needed to acquire an alternative way of retrieving photos.Â  A quick purchase of a USB SD card reader at an airport shop, and the tablet happily saw the SD card as a mass storage device.Â  The reader is no bigger than an average sized thumb-drive, so can happily live in my man-bag. 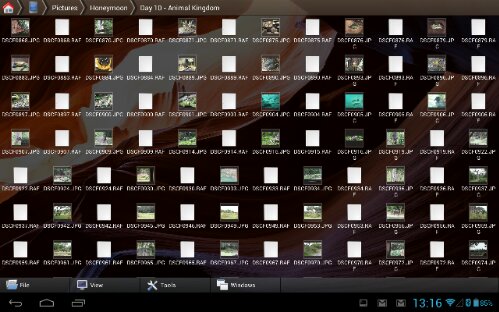 For the past few years, I’ve been using ES File Explorer as my go-to file manager on Android.Â  It’s done the job reasonably well, but has been problematic for network transfers (oddly failing on > 1Gb movie transfers).Â  Before flying, I installed FX as an alternative, and found it’s SMB performance much, much better.Â  Flinging files between USB/SD Card and internal storage also appears to be much improved. 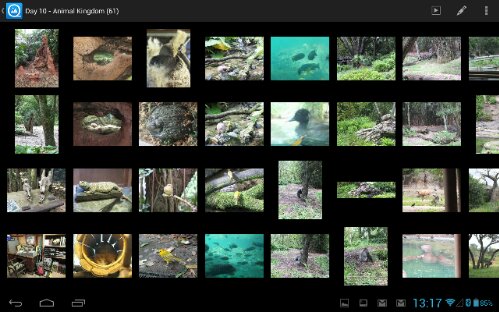 So, now able to copy files, I needed a way to review images, delete ones I didn’t want, and view EXIF information.Â  I set the camera to shoot RAW+JPG, giving my the flexibility to work with JPGs locally, but still process RAW at a later date.Â  Offloading daily, there’s plenty of space on a 32GB SD card to shoot that way.Â  I played with a few of the RAW viewers on the Android Market, but most of them fell way short of my expectations.Â  Instead, I looked for good gallery/JPG viewers which support displaying EXIF.Â  I settled on QuickPic, a free, fast, clean and customisable gallery app.Â  Browse photos by folder, zoom in, view EXIF and delete files.Â  I’d love to see an Adobe Bridge type application, but clearly we’re nowhere near that point yet.

Able to clean up my collections of photos, I can then pop back in to FX and remove any RAW files I no longer wish to keep.Â  My rule of thumb is that I keep one or two photos per subject, and remove RAW files for those images that I no longer keep the JPGs for.Â  This keeps the folder sizes down to reasonable.

Two jobs left to do.Â  These are holiday photos, so I’m not attempting world class photography.Â  Most are snapshots, aids to memory.Â  A few however I do want to play with and edit.Â 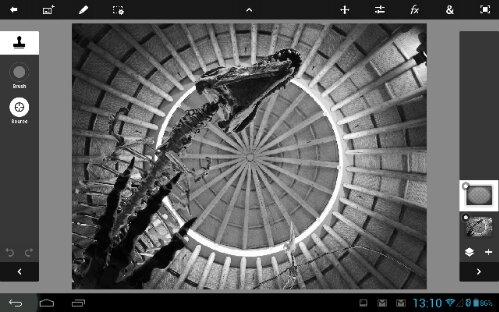 Whilst I’ve not found any RAW editing for Android. Photoshop Touch supports importing JPG image sizes up to 12MP (conveniently the large image size for the camera).Â  On my old Xoom, PS Touch staggers a bit at 12MP, but handles 6MP images just fine.Â  PS Touch contains a range of image manipulation tools, from bruses, cloning and erasing, through to layers and effects that you would be used to finding in full desktop Photoshop.Â  It’s a good piece of kit, and the only filter I was really missing was some form of noise reduction for high ISO shots (I wonder how long before someone comes out with Noise Ninja for Android?).Â  Images can be exported as JPG, or uploaded to Adobe Cloud to download later as PSDs to work on in Photoshop Desktop.Â  The touch screen of the tablet works really well with a capacitive stylus and Photoshop – using a mouse to edit photos feels limiting by comparison. 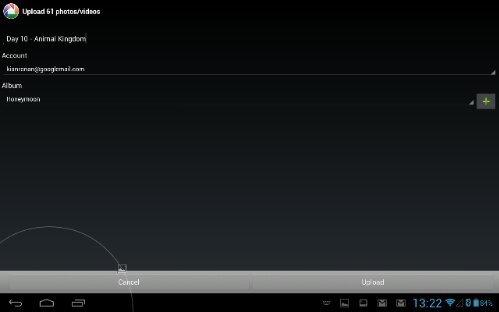 Finally, image upload.Â  My images go two ways.Â  Edited photos go to Flickr, where as holiday and everyday photos go to Picasa.Â  Picasa support is built in to Android Gallery, and is simply a case of selecting a folder and selecting the Picasa button.Â  The range of options is limited, you can create a new folder, add to an existing folder and set a caption for the uplaoded images.Â  It’ll happily do this as a batch and queue uploads.Â  Sending Photos to Flickr requires using a a third party app.Â  The official Flickr app is adequate for uploading, but looks a bit lousy on a high-res tablet (which is a bit of a shame, since photos look great on this).

Finally, when we got back, again using FX, I backed up all the photos to our local NAS over SMB, completing the workflow/backup cycle.

At no point have I needed to touch laptop or desktop to make any of this happen.Â  It may not be completely perfect (RAW would be nice), but it is a workable remote workflow without having to drag around a full sized laptop.Â  It’s not only workable, it’s pleasant to use, and give the fact that I almost always have my tablet on me, can be done from almost anywhere with a WIFI or 3G connection.