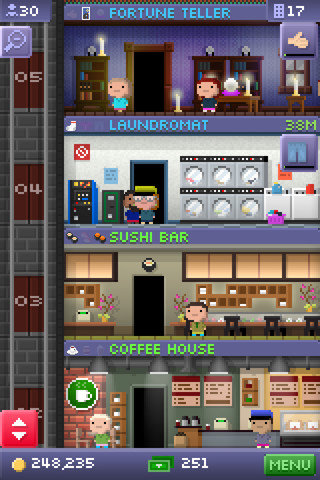 While down in London last, Mr Aquarion introduced me to Tiny Towers, a tower building game. I played it for a few hours and decided what I really wanted to play was Sim Tower. Running OS X, and Sim Tower being “of an age”, this left me with a platform challenge to overcome.

Despite running Windows VMs for work, I didn’t fancy running a Windows VM for play, so my first attempt was to run the game using WINE. This failed miserably, with my machine turning in to a scorching, flaming, fireball of pain (ow hot, ow hot). For a game involving 2D graphics released in 1994, not the best of success.

My second attempt involved finding a port of Sim Tower built and tweaked against WINE libraries as a nice and tidy application package. I’m usually a fan of this approach – it makes life easy-ish for the user and most of the hard work has already been done by other developers. Same problem again – aircraft carriers ahoy, burning lap syndrome and a battery with less staying power than Usain Bolt running a marathon.

At this point, I fell in to an air of despair. Here was a game from my childhood, the only Sim-type game I truly enjoyed, and nothing (sensible) would work (I’m still not building a Windows 98 VM). I then remembered that Maxis were developers of Awesome, and lots of their games worked on both MacOS Classic and Windows. Indeed, the SimTower CD works for both platforms – FANTASTIC. All I need is a Mac Classic environment running on top of OS X. In comes SheepSaver a MacOS emulator. A bit of juggling to find compatible ROM images and a copy of MacOS 9 and I had a working Mac Classic environment. To boot, it only takes a few second to … boot. From there, SimTower took the whole of 2 minutes to get up and running.

Once I decided I was switching to running on MacOS, I was surprised how easy it was. Back in the day, I didn’t own a Mac, I spent too long hacking around with Windows in its various flavours (and a few flavours of Linux). Installing SimTower consisted of dragging a package to the hard disk and running it. No, “missing DLL” errors, no “incompatible DirectX” malarky, no “where’s DOS 6.22?”, the bugger just worked. There are days when I wonder how the smurf Windows ever managed to get a stranglehold on the market (yes, I know) when the alternatives were so much easier to use. 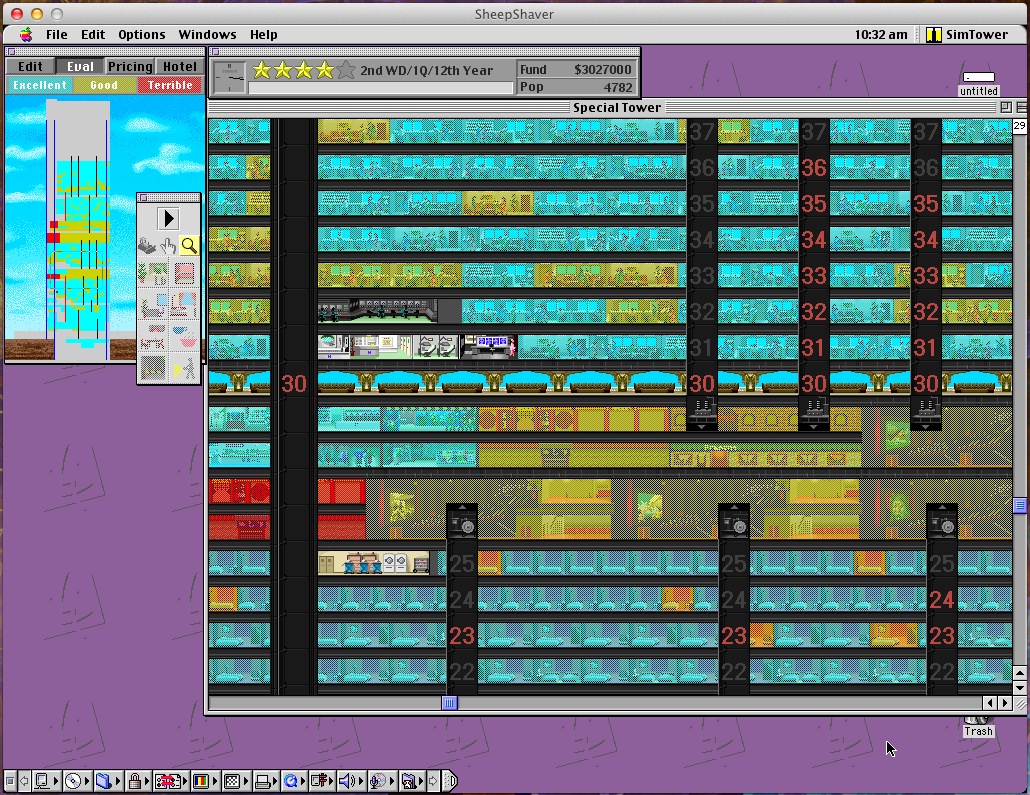