Some of them are getting a little over-excited over it though. Both the BBC and NU.nl are showing pictures of Gadaffi’s body on the front page, with no warnings – just plastered in your face. This may be rather unsuitable for younger viewers, for which the beeb and various news sites are seen as trusted sources, and as such are accessible behind school firewalls. It’s also very triggery for a lot of people, especially those who have been involved in trauma or handling the recently-deceased. 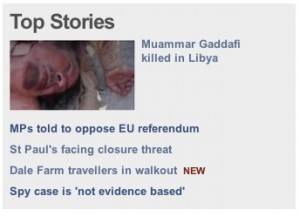 Even viewing news articles not on the front page isn’t particularly safe, since there’s a picture and reminder in the top right that Gadaffi is dead, and just to back that up, a picture of his dead face, still covered in blood.

I’m against censorship of the internet, but I am for an awareness of your viewers. Beeb, Nu.nl, you may want to take this in to account.