It’s a well regarded fact that geeks often live off a combination of pizza, Coke (Dew for our Merkian and enlightened home bretheren) and foodstuffs that generally come with an immediacy. Quite a few of us are also food-geeks, but our planning faculties tend to let us down in having raw materials to hand to put dishes together. Despite the fact that I live around the corner from the major supermarket (and I really do mean around the corner), I am particularly pants at getting, and then using fruit and vegetables everyday. Until the garden proper kicks off, we decided to start getting our vegetation in from Abel and Cole. The idea is working on the time honoured principal that if someone thrusts it in our face, we’re going to eat it.

There’s also the benefit that Abel and Cole boxes are organically sourced, and all UK produce, zeroing the air miles as well. Ignoring the fact that a little man comes and delivers it to the door, it’s significantly better for the environment, see?

So, for a first time out we decided to order a mixed medium box, some mushrooms and a loaf. Pretty standard fare, except that we were told “order over Â£20, get a mixed box free”. Which meant that when the box arrived, we were greeted with this: 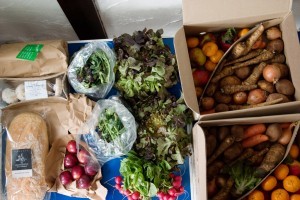 For the inventory, there are potatoes, carrots, parsnips, onions, rocket, radishes, broccoli, apples, plums and oranges plus the mushrooms and bread we bought extra. The potatoes are smaller than those you’d be expecting from your supermarket, as are the onions, but there is a significant difference in taste.

Out of this fine assortment, there’s a (broccoli) bit that Cat (rocket) can’t (radishes) or won’t eat. Abel and Cole have a preferences system so you can adjust what they will and won’t send to you. We clearly need to do a little more tweaking on ours, but for a first effort, not bad at all.

So what to do with a mountain of good quality food? Well, best cook it. See the next post for my basic, but nommish beef casserole recipe.